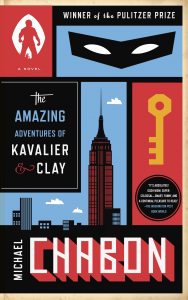 The Amazing Adventures of Kavalier & Clay by Michael Chabon was the 25th selection for One Book, One Chicago. The season’s program explored the book's central theme: Heroes: Real & Imagined. From October 2014 through May 2015 we explored heroism from multiple perspectives, as recounted through personal experience, imagined in literature, presented in politics, or synthesized in music and art.

In The Amazing Adventures of Kavalier & Clay, Joe Kavalier and Sam Clay reimagine and redefine the comic book hero and in the process force us to grapple with questions about heroism: what does a hero look like, why do we need heroes, what makes one a hero—these are only some of the questions with which we struggle alongside Joe and Sammy as they create The Escapist, their greatest comic book superhero.

The 2014-15 One Book, One Chicago season launched with an appearance from author Michael Chabon at Harold Washington Library Center, and continued with programs at the library and partner locations exploring topics including:

In addition to events, the season featured the introduction of several innovative digital programs including: