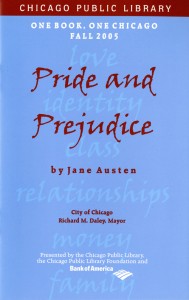 Jane Austen’s classic 19th century novel juxtaposes the “Proud” Mr. Darcy with the “Prejudiced” Elizabeth Bennet for a comedic, sparring and spirited tale where love triumphs above all else. Contemporary author Anna Quindlen describes the work as one that “illuminates the enduring issues of social pressures and gender politics” and thus has assured the continued popularity of the book. Pride and Prejudice was chosen for One Book, One Chicago’s ninth reading selection.

The selection of a novel by a British writer celebrated the unique relationship between the Chicago Public Library and the British people, whose donation of books following the Great Chicago Fire prompted the founding of the Chicago Public Library. The Chicago Public Library hosted selected readings by Chicago actor Cheryl Lynn Bruce and Martha Lavey, artistic director of the Steppenwolf Theatre; over 50 book clubs in neighborhoods all over the city; lectures; and several discussions at the Harold Washington Library Center and DePaul University. Northlight Theatre’s production of the theatrical adaptation was highlighted among our programs.