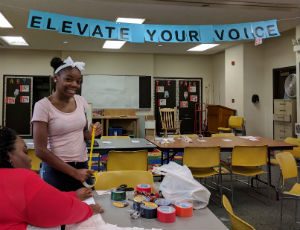 Ms. Faith, the Librarian at Sherman Park Branch, has "hit the ground running" since she began working for Chicago Public Library in March 2017. From arts and crafts, writing, STEM and technology workshop to field trips, the program offerings she's developed vary greatly and are numerous.

The Cinderella Project, for instance, is where Tia and Marketta (along with several others) were creating a dress out of duct tape for a gift prize raffle at an end-of-summer showcase scheduled at the nearby Chicago Public Library Kelly Branch. It was during this program that they shared the story of becoming poets, with thanks to Ms. Faith.

Tia explained, "We started writing poems at the beginning of the year." Ms. Faith interjected "they are using poetry as an avenue for creating change" through a Teen Hip Hop & Poetry series offered on Thursdays. Marketta added, "I always perform at the Open Mic. I like that I can actually come up with something good in a short amount of time."

Ms. Faith shared with the teens that she competed in her very first Open Mic competition (hosted by Little Black Pearl) at age 16, and won a second place prize of $75. Prior to earning her Master's Degree in Library and Information Science, Ms. Faith earned her Bachelor’s Degree in poetry from Columbia College. She's continues to perform poetry and surround herself and now the teens with a community of creative, literary people. Several guest poets have visited Sherman Park since Faith's arrival.

Tia explained she liked writing, but said "I didn’t know about poetry until Faith came. [Since then], I wrote a lot of stuff. Teen stuff." Even Tia's older sister became interested and wrote and read some poems at the branch's Open Mic program. Marketta happily noted, "I can write two [poems] in thirty minutes when I have different topics from Ms. Faith." She explained Ms. Faith provides prompts and mini-lessons for them, and they she professed, "we pay good attention because there’s a pop quiz with prizes at the end."

CPL offers a number of other teen Open Mic programs across the city; check them out here!