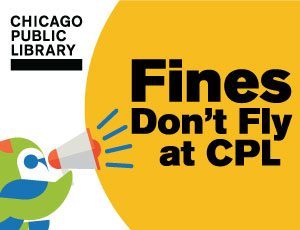 Mayor Lori E. Lightfoot today joined Chicago Public Library (CPL) Commissioner Andrea Telli to announce a new policy to eliminate library late fees and remove outstanding debt for library patrons. Beginning October 1, CPL will eliminate overdue fines on all CPL-owned items currently in circulation, removing unfair barriers to basic library access, especially for youth and low-income patrons. These new policies are the latest in a series of efforts by Mayor Lightfoot to eliminate regressive fines and fees policies that have historically prevented too many Chicagoans from contributing to the local economy, and replace them with new policies to promote economic inclusion for all of Chicago’s communities.

With the announcement, Chicago becomes the largest city, and largest public library system in the U.S., to join the growing movement of eliminating overdue fines. Such fines have increasingly been found to be an ineffective tool in encouraging the return of library materials. Library patrons will still be responsible for returning books, and those who do not return their books will still need to either replace, or pay for the value of, any materials not returned.

“Like too many Chicagoans, I know what it is like to grow up in financially challenging circumstances and understand what it is like to be just one bill or one mistake away from crushing debt,” said Mayor Lori E. Lightfoot. “The bold reforms we’re taking to make the Chicago Public Library system fine-free and forgive City Sticker debt will end the regressive practices disproportionately impacting those who can least afford it, ensure every Chicagoan can utilize our city’s services and resources, and eliminate the cycles of debt and generational poverty because of a few mistakes.”

CPL data indicates the disproportionate impact late fines have on different communities in the city, with 1 in 3 patrons in CPL’s South District (below 59th Street) currently unable to check out items because they owe $10 or more in fines and fees. In CPL’s North District, from North Avenue to Howard Street, this number drops to 1 in 6. Furthermore, many of the blocked users are those who can benefit most from the resources at Chicago Public Library—1 in 5 suspended library cards citywide belong to children under 14.

“I’m thrilled that CPL has taken this important step towards ensuring that the library is accessible for all,” said CPL Commissioner Andrea Telli. “CPL welcomes home the thousands of Chicagoans who have become disconnected from their local branch due to fines. We are excited to see what we can build together with equitable access to information and learning.”

By October 1, all patrons will have any outstanding overdue fines from CPL materials cleared from their accounts. Materials checked out by CPL patrons will now automatically renew up to 15 times if there are no holds on the item. Items will be marked as “lost” and accounts will be charged replacement costs one week after the last due date, but the charge will be cleared if the item is returned. Interlibrary loan items and Museum Passports (which allow free admission to Chicago museums for children) will still be subject to overdue fines.

"This is honestly the most exciting thing to happen at CPL since I’ve been here,” said CPL Branch Manager Lisa Roe. “It’s amazing to 'walk the walk' with regard to free and open access for all patrons."

Research from other fine-free systems has indicated that fines do not increase return rates, and further that the cost of collecting and maintaining overdue fees often outweighs the revenue generated by them. Late fines constitute just 0.7% of CPL’s total budget. Additionally, fine collection often results in negative patron/staff interactions, undermining general public trust and comfort in the public library.

"The essential mission of publicly funded libraries is free, equal and equitable access to information in all its forms,” said American Library Association Executive Director Mary Ghikas. “We applaud Mayor Lightfoot’s and Commissioner Telli’s move to eliminate Chicago Public Library fines, which create economic barriers and negatively impact the working poor, children and marginalized populations. Every member of the community has a right to library service. Eliminating fines in Chicago will transform lives through education and lifelong learning.”

As a result of these policy changes, Chicago Public Library anticipates the return of thousands of outstanding items as well as thousands of patrons whose access to library materials has been impeded by overdue fines.

Chicago Public Library’s previous amnesty periods have shown that eliminating fines has a significant impact on making the library system more accessible for all. The most recent fine amnesty in 2016 resulted in over 15,000 new patrons and patrons returning their cards to good standing and also included a return of over $800,000 of CPL material. When CPL previously offered an amnesty program in 2012, the library received 101,301 overdue items valued at approximately $2 million and waived $641,820 worth of fines. 29,500 users renewed or applied for cards. The late materials ranged from items only a few weeks overdue to one book that had been due in 1934. Almost every item returned was able to be put into circulation within a few days so that other patrons could check them out.

The CPL Board authorized the elimination of overdue fines at their board meeting on September 18, 2019. The board also approved several administrative changes to reduce punitive measures and to help increase the return rate. With new policies in place to incentivize participation in libraries across the city, new and returning library patrons will benefit from the recent expansion of branch locations and programs, including three new library branches co-located with CHA apartments that opened earlier this year, an expansion of teen YOUmedia learning labs to eight new locations across the city and the upcoming opening of Legler Branch, the first regional library branch located on the city’s West Side since the 1970s.

Since 1873, Chicago Public Library (CPL) has encouraged lifelong learning by welcoming all people and offering equal access to information, entertainment and knowledge through innovative services and programs, as well as cutting-edge technology. Through its 81 locations, the Library provides free access to a rich collection of materials, both physical and digital, and presents the highest quality author discussions, exhibits, and programs for children, teens, and adults. CPL received the Social Innovator Award from Chicago Innovation Awards; won a National Medal for Library Services from the Institute for Museum and Library Services; was named the first-ever winner of the National Summer Learning Association’s Founder’s Award in recognition of its Summer Learning Challenge; and was ranked number one in the U.S., and third in the world by an international study of major urban libraries conducted by the Heinrich Heine University Dusseldorf in Germany. For more information, please call (312) 747-4050 or visit chipublib.org. To follow CPL on social media, visit us on Twitter (@chipublib), Facebook (@chipublib) or Instagram (@chicagopubliclibrary).