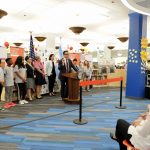 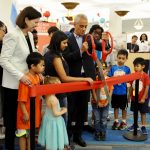 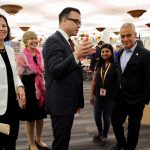 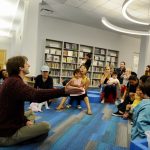 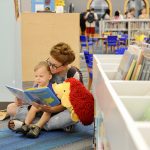 “Early learning programs and initiatives provide a strong educational foundation that is imperative in supporting the long-term success for the children of Chicago and for our future,” said Mayor Emanuel. “Thomas Hughes Children’s Library and the additional early learning library spaces throughout the city will give every child the support they need in their early years to ensure their success in college, career, and in life.”

Thomas Hughes Children’s Library has a “plaza” for families with children of all ages to gather, and three surrounding “neighborhoods” to serve early learners, elementary learners and tweens with computers as well as books and play collections. The Early Learner Neighborhood promotes playbased learning through play and includes an interactive puppet stage, a baby garden and a story nook. The Elementary Learner Neighborhood provides STEAM-based activities and materials for school-aged children to promote inquiry-based learning. The Tween Neighborhood includes a digital media space where children are encouraged to explore STEAM projects that incorporate laptops, digital cameras, keyboards and blue screen and virtual reality tools.

"Our contribution to the Thomas Hughes Children’s Library and additional early learning spaces is an investment in our hometown and in our future workforce, demonstrating the importance of STEM education and helping give Chicago's youth the building blocks they need to be successful,” said Chris Crane, Exelon president and CEO.

“The vision of Mayor Emanuel, the Chicago Public Library Foundation and our generous donors has allowed us to expand, enhance and update our offerings for our youngest patrons and their families,” said Chicago Public Library Commissioner and CEO Brian Bannon. “Books, toys, maker spaces and technology are all important parts of the learning experiences that build 21st century leaders.”

The redesigned Thomas Hughes Children’s Library is part of continued investments to the city’s public libraries under Mayor Emanuel’s leadership. In 2013, CPL announced the co-location of public libraries in schools and public housing, including a campus on the new Back of the Yards High School. Recently, in partnership with the Chicago Housing Authority, Mayor Emanuel announced co-located public libraries and affordable senior housing developments in three new mixed-income housing developments. The co-located CHA/CPL facilities will strengthen communities with affordable housing and community anchors that support life-long learning.

Since taking office, Mayor Emanuel has significantly expanded early childhood programs and early learning initiatives at CPL’s 80 branch locations. Each year more than 35,000 children and families participate in early literacy workshops provided by branch libraries to support the basic building blocks for early literacy and success in school. Launched in 2012, the Early Learning Portal ensures that parents have access to the information they need to make the choices that are best for their children and families. In 2011, the summer reading program was re-imagined to the “Summer Learning Challenge” to incorporate science, technology, engineering and math as well as creative discovery activities. Rahm’s Readers Summer Learning Challenge, which has a superhero theme this summer, successfully engages more than 80,000 Chicago kids in STEM learning throughout the summer months.

Chicago Public Library assembled a group of strategic advisors and thought partners to provide expertise, feedback and data throughout the Thomas Hughes design process. Representatives from organizations including Chicago Children's Museum, Erikson Institute, Lego Foundation, Museum of Science and Industry, Thirty Million Words, University of Chicago-CEMSE and Yale University participated in advisory and planning sessions for the new space. The space was designed by Gensler Chicago.

Since 1873, Chicago Public Library (CPL) has encouraged lifelong learning by welcoming all people and offering equal access to information, entertainment and knowledge through innovative services and programs, as well as cutting-edge technology. Through its 80 locations, the Library provides free access to a rich collection of materials, both physical and digital, and presents the highest quality author discussions, exhibits and programs for children, teens and adults. CPL received the Social Innovator Award from Chicago Innovation Awards; won a National Medal for Library Services from the Institute for Museum and Library Services; was named the first-ever winner of the National Summer Learning Association’s Founder’s Award in recognition of its Summer Learning Challenge; and was ranked number one in the U.S., and third in the world, by an international study of major urban libraries conducted by the Heinrich Heine University Dusseldorf in Germany. For more information, visit chipublib.org. Sign up for our e-newsletter and follow us on Twitter, Facebook and Instagram.

About the Chicago Public Library Foundation

The Chicago Public Library Foundation was founded in 1986 as a true public/private partnership with the City of Chicago to ensure the margin of excellence for Chicago’s outstanding Library. Through the support of many civic-minded individuals, corporations and foundations, the Foundation provides ongoing funding for collections as well as a range of community-responsive programs such as early learning initiatives, Teacher in the Library, CyberNavigators, YOUmedia, and One Book, One Chicago. Over the past 30 years, the Foundation and its donors have raised $85 million in support for Chicago Public Library. For more information, visit cplfoundation.org or call (312) 201-9830.