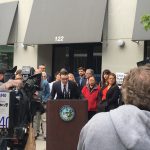 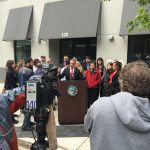 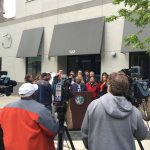 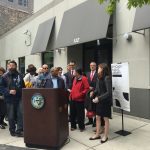 Mayor Rahm Emanuel today announced a new branch library on the Near West Side and new fire station on the Near North Side are being planned through public-private partnerships with local developers. The projects are in addition to the new Fleet and Facility Management (2FM) that will be constructed in Englewood, utilizing funds from the sale of city-owned land at 1685 N. Throop St.

“These new projects will benefit not just the neighborhoods where they are located, but communities across the City of Chicago,” Mayor Emanuel said. “Through partnerships with local businesses we can create much-needed amenities for neighborhood residents while saving taxpayer dollars.”

The library, planned for a 16,500-square-foot building at 118 N. Aberdeen St., will serve the Near West Side’s rapidly growing residential community. The two-story property will be rehabilitated for library use in an effort led by owner Sterling Bay and provided to the Chicago Public Library system, pending the City’s review and approval processes.

“Branch libraries provide resources for every member of the community,” said Library Commissioner Brian Bannon. “We look forward to our innovative programs reaching Chicagoans in one of the fastest growing neighborhoods in the country.”

The new library facility will offer a built-out early childhood active learning space, and programs and spaces for area children, teens and families. Free one-one-one homework assistance will be provided for school-aged children through the Library’s Teacher in the Library program. Teens will have access to technology, resources, and classes that inspire exploration, creativity and learning through the YOUmedia program. Traditional library programs, such as book clubs and educational and cultural programming will also be offered, as well as computer classes and one-on-one coaching to build digital literacy, technology and job-seeking skills for adults and seniors.

“With all new and developments moving forward throughout the Near West Side, residents have repeatedly identified a library as an important amenity for their families,” Alderman Burnett said.

On the Near North Side, work is being planned on a new, state-of-the-art Engine Co. 42 fire station at the base of a new mixed-use tower in the heart of River North. Both projects will be subject to standard review and approval procedures involving the community, the Chicago Plan Commission and City Council.

Planned by developer Friedman Properties Ltd., the new station would rise immediately west of the existing Engine Co. 42 station at 55 W. Illinois St. After the new station is completed, work would begin to replace the old station with up to 614,000 square feet of office and mixed-use space.

The cost of the $20.2 million fire house would be paid for by Friedman Properties. Friedman would also pay the City $5 million for the 14,600-square-foot firehouse property and an adjacent, 3,150square-foot alley.  Terms of the proposed deal structure will be posted on DPD’s website and alternative bids will be considered for a 30 day period.

“This project has the potential to be a unique partnership that could enhance a prime development location while providing a new home for Chicago’s bravest,” Ald. Reilly said. “I look forward to working through the community engagement process to see if we can make this concept a reality at no cost to our taxpayers.”

The tower, to be designed by DLR Group, could include an approximately $10 million voluntary contribution toward the City’s Neighborhood Opportunity Bonus system, which supports commercial development in underserved neighborhoods, city landmarks, and local infrastructure.

“The Neighborhood Opportunity Bonus system is key tool in leveraging private investment toward important neighborhood projects that directly benefit the public and create resources for communities that need them,” said Department of Planning and Development Commissioner David Reifman.

The site is currently zoned Downtown Mixed-use (DX-7), and the City expects to receive about $4.4 million in real estate taxes annually for the new development.

The projects reflect Mayor Emanuel’s commitment to improve local neighborhoods through innovative public-private partnerships. In February, the Mayor announced the City’s Department of Fleet and Facility Management (2FM) headquarters would be relocated from 1685 N. Throop St. in West Town to Wentworth Avenue and 69th Street in Englewood, along with 200 jobs. The purchaser of the 18-acre Throop location would also build the new 2FM facility as part of the purchase agreement. The bid process is being coordinated by Cushman & Wakefield.