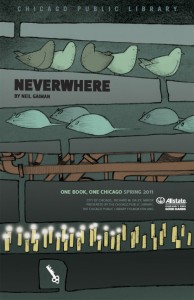 For the 20th selection for One Book, One Chicago, the Chicago Public Library chose Neverwhere by Neil Gaiman, one of the most versatile and prolific writers working today. The winner of numerous awards in fantasy fiction, comics and books for children, Gaiman wrote Neverwhere after being disappointed with how the script he had written for television was translated to the screen. The result of his creative tenacity is the richly realized and delightfully fun story of Richard Mayhew, a quiet office worker who helps a mysterious woman and subsequently finds himself in the fantastical “London Below,” where people speak to rats, beasts roam the subway tunnels and darkness is only one of many frightening things.

To celebrate Neverwhere, the Library offered a full slate of programming. Neil Gaiman appeared in two separate programs—a solo talk as well as a conversation on stage with friend and fellow writer Audrey Niffenegger; he also met with teens in YOUmedia who had read the novel and created projects around it. Tours of our own “Chicago Below,” the Pedway system, were included by Margaret Hicks of Chicago Elevated; as were a full reading of the popular stage adaptation by Lifeline Theatre; a discussion on fairy tales between writers Lydia Millet and Kate Bernheimer; and a lecture by physicist and cosmologist Lawrence Krauss on alternate realities.