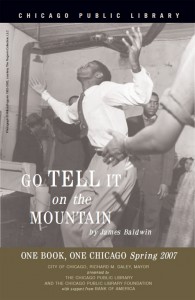 James Baldwin’s Go Tell It on the Mountain is a flagship work of American 20th century culture and history. Telling the story of a young boy coming of age under the gaze of a puritanical minister father, the novel draws much from Baldwin’s own life growing up African American during the Harlem Renaissance. It wasn’t until 1948 that Baldwin, after years struggling as a writer and working odd jobs in New York, set off for Paris, where he found success and creative freedom. “Once I found myself on the other side of the ocean,” Baldwin told the New York Times, “I could see where I came from very clearly, and I could see that I carried myself, which is my home, with me… I am the grandson of a slave, and I am a writer. I must deal with both.”

In spring 2007, the Chicago Public Library selected Go Tell It on the Mountain as the 12th title for One Book, One Chicago. Special events included screenings of the PBS American Masters profile of Baldwin; a reading combined with musical performances by the Pilgrim Baptist Church Choir; and an appearance by Jabari Asim, author of The N Word: Who Can Say It, Who Shouldn’t and Why, whose lecture explored the history of this controversial word, its roots in American rhetoric and its use in Baldwin’s novel.