All CPL locations are closed through June 7. Please see our COVID-19 page and Closure FAQs for more information.

May 24 marks the 200th anniversary of Queen Victoria's birth, but in 1819, no one could have anticipated that one day, an entire era would be named after the Duke of Kent's newborn daughter.

Victoria became queen on June 20, 1837, just four weeks after her 18th birthday. The world was immediately captivated. Her life and times have been thoroughly documented. There are countless biographies of Victoria, including:

Who Was Queen Victoria?

Victoria and Albert had nine children, and Albert dreamed of uniting Europe through a network of royal marriages. After his untimely death at 42, Victoria did her best to carry this out, with mixed results. Nevertheless, by the end of her life she was known as the "Grandmother of Europe." Her descendants currently sit on almost every remaining European throne.

Victoria's life has inspired novels, movies and TV series, among them: 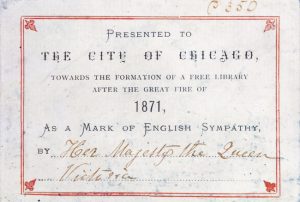 Did you know Chicago Public Library owes its start to Great Britain?  After the Great Chicago Fire of 1871, Victoria's government made a donation of more than 8,000 volumes to establish a free public library for Chicago's citizens. You can read about it in CPL History.

A toast to Her Majesty, Queen Victoria!