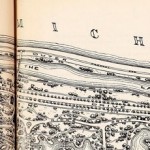 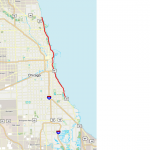 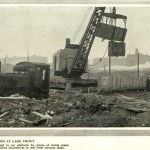 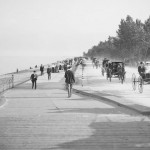 Lake Shore Drive is a choice, if not particularly exclusive, street. According to the U.S. Census, more than 10,000 of the Near North Side’s 80,000 residents live within a block west of Lake Shore Drive. Another 774 live in Lake Point Tower at 505 N. Lake Shore Drive (the only odd numbered address and the only residential building east of the Drive.) Tens of thousands more live in the high-rise buildings that form a wall from Lake Shore Drive’s start at Hollywood Avenue to its southern end at 66th Street.

This high-rise wall exists for the sake of lake views. East of Lake Shore Drive, with a few exceptions, there is only parkland and Lake Michigan itself.

The high-rise wall continues north along Sheridan Road and south along South Shore Drive. Beyond the ends of Lake Shore Drive, much of the Lake Michigan shore is private property, not parkland. Therefore, these streets have buildings on both the east and west sides of the street.

Despite Lake Shore Drive’s well-deserved fame, it is of relatively recent origin and is still a work in progress. The Drive’s birth may be traced to the 1869 act that established the Lincoln Park District on Chicago’s North Side. The act provided for the laying out of an unnamed drive from the end of Pine Street (Michigan Avenue) to North Avenue along Lake Michigan. This half-mile stretch was completed in the 1880s and named Lake Shore Drive.

Later acts allowed Lincoln Park to build a drive out in the lake and fill in behind it with garbage. Development continued in fits and dribbles. The 1901 Rand McNally map shows the “New Breakwater Carriage Drive and Sidewalk” running through the park to Diversey. Lake View Avenue and Sheridan Drive continued it north to nearly Irving Park. Every 10 or 15 years another section would be added and/or have its name changed to Lake Shore Drive.

A major milestone was the 1937 opening of the Outer Drive Bridge across the Chicago River and south to Grant Park. This closed a major gap between North Lake Shore Drive and the variously named drives along the southern lake shore. In 1940, the Chicago Park District renamed various Northside drives as Lake Shore Drive. They did the same on the South Side in 1946.

Non-locals are often baffled by the tendency of Chicagoans to refer to Lake Shore Drive by its initials, as in the following Craigslist ad: “2 bed 2 bath on LSD, $4,475.” Old-timers often call LSD the Outer Drive. The Inner Drive is a slower street that runs alongside LSD in spots. East Lake Shore Drive, which runs parallel to North Lake Shore Drive for a few blocks in Chicago’s Gold Coast area, is another source of confusion.

A trip down Lake Shore Drive provides spectacular views of the lake, Chicago’s skyline and access to many of Chicago’s major parks, beaches and museums. To find more information about Lake Shore Drive and its history search our catalog, read my Grant Park posts, or come and visit the Municipal Reference Collection and Special Collections' Chicago Park District Archives. We have the song as well.