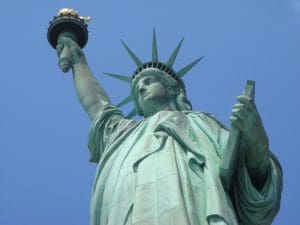 Every year, the Statue of Liberty welcomes millions of visitors and immigrants to New York City. That includes lots of kids and families! This statue was a gift from France to the United States of America in 1884, on America's 100th birthday. Did you know Lady Liberty is 151 feet tall? She proudly holds a torch in her right hand and a book in her left hand.

Want to know more about the history of the statue and why it is important to America? Try these books for kids of all ages.

Liberty Arrives! tells the special history of statue's creation and its journey from France to the United States.

Light for All is about the heart of the Statue of Liberty. The statue's torch is meant to shine for everyone coming to America. It represents fairness and opportunity for everyone.

Did you know that Lady Liberty is a moving statue? Yep, she's on the move. Her Right Foot shares more about her travels and her journey to greet those traveling by sea.

When Areli moves from Mexico to New York City, she doesn't understand why she has to leave her home and everything that's familiar to her. On a school trip to Ellis Island, Areli finally realizes the importance of her journey to America. Areli Is A Dreamer tells the true-life story of Areli Morales, a DACA recipient living in the United States.

I Is for Immigrants is an ABC story with colorful pictures that represent the culture and traditions of immigrants living in New York City.

The Year I Flew Away is a magical story about finding your sense of belonging in a new place. Gabrielle moves to New York from Haiti to live with her uncle's family. However, she has a hard time fitting in with her thick Haitian accent. When a witch promises to help her, Gabrielle finds herself with more trouble than she bargained for.

The Statue of Liberty is important to people all over the world. What does it represent for you?