During the teens and 1920s, the South Park Commissioners built a number of ornamental viaducts across the Illinois Central tracks and extended roads into the new parkland. They also engaged in landscaping and accepted the gift of Buckingham Fountain.

The wide open grassy spaces proved ideal for landing airplanes. Grant Park became the official U.S. Mail airfield and a number of aviation meets were held there. After the Winged Foot Express disaster, most of the aviation activity moved to outlying fields.

In 1919, the Lakefront Ordinance (Harbor District Number Three), not to be confused with the much later Lakefront Protection Ordinance, was passed. The Lakefront Ordinance formalized the agreements between the City, Illinois Central and the South Park Commissioners as to the development of the lakefront between downtown and Hyde Park.

In 1925 the Commissioners agreed to turn over the area between Michigan, Monroe, Columbus and Jackson to the Art Institute. Part of the area went to the new Goodman Theater. In years since, the Art Institute has bridged the Illinois Central Tracks and built several new wings. In keeping with Montgomery Ward’s spirit, a portion of the development has been underground, or at least earth-covered.

South of 12th Street, renamed Roosevelt in 1919, enough of the lake had been filled in to construct the Field Museum (1921), Soldier Field (1924), Shedd Aquarium (1930) and Adler Planetarium (1930). Due to Montgomery Ward’s legacy these were all built south of the original boundary of Grant Park (half a block north of Roosevelt). This is shown in the next photo from the National Map. My annotations are in red. 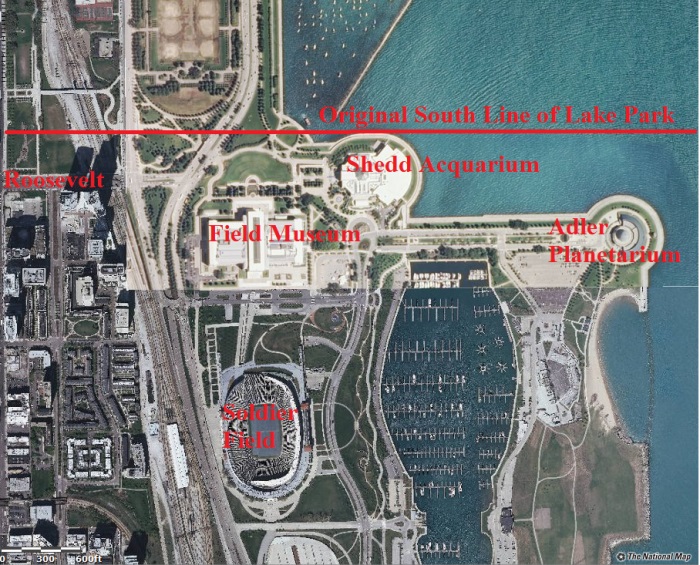 In 1918, the military occupied another small sliver of their reservation north of Monroe. The Navy bought an old steamer, renamed her the USS Commodore, and dragged her ashore. The Commodore would serve as the immobile flagship of the Illinois Naval Reserve until 1930.

Another infamous vessel arrived this year as well. Three years earlier, the SS Eastland rolled over and sunk in the Chicago River, killing over 800 people. The navy bought her, outfitted her as a gunboat and renamed her the USS Wilmette.

The triangular military reservation between the Illinois Central tracks, Monroe Street and the lake became a parking lot in 1921. The South Park Commissioners charged 25 cents and provided guards. This was their response to the rash of auto thefts elsewhere in the park.

In 1926 the South Park Commissioners built a 2600-space parking lot there. It too would reemerge later in the century as an underground facility with parkland above.

A new Naval Reserve armory was completed in 1930. It was built on a new 100x500-foot pier built by the Commissioners, apparently in exchange for the parking lot land.

Buildings were also built on the lakefront to serve as headquarters for the yacht clubs.