In 1901, the City Council changed the name of Lake Park to Grant Park. The Naval Reserve berthed the USS Dorothea at the foot of Randolph Street, occupying a sliver of the military reservation.

The Plan of Chicago was heavily promoted with speeches such as Chicago Can Get Fifty Million Dollars for Nothing. This claimed that using all of the city’s garbage, coal ash, industrial waste, construction debris, etc. would create 31 free acres of parkland each year.

No doubt all of these materials went into the landfill. The freight tunnel system built a disposal station at 12th street to dump materials from the Loop and garbage wagons hauled from nearby neighborhoods. However, the majority of the fill, especially in later years, was likely from dredging. The harbormaster reported that several million cubic yards were dredged each year from the harbor and river by the City, Federal Government and the Sanitary District. The amount dredged was far in excess of the amount of garbage available.

The 1906-1908 Report of the South Park Commissioners gives the following sources of fill (in cu. yards):

According to the Illinois Tunnel Company, the bulk of their material was coal ash and construction debris and earth from buildings being built in the Loop.

By 1908 it was reported the fill was complete--just grading and landscaping were left to do. Next is a 1908 photo from the Annual Report of the South Park Commissioners. Following that is a map from the Grant Park Framework Plan 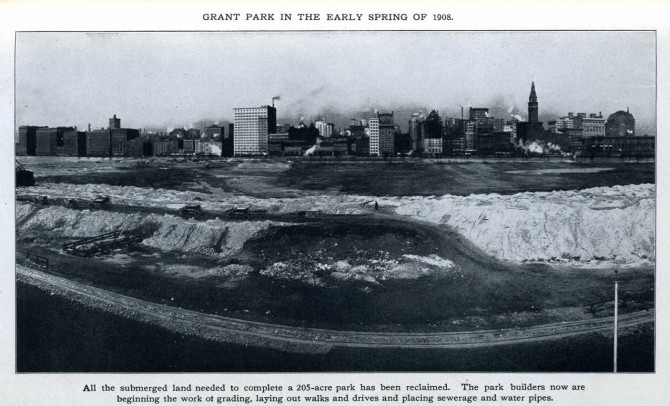