What if all of Chicago read the same book? Explore the theme "Beyond Borders" with us: Read Exit West, attend online events and more.
OBOC Home OBOC Home
Sep 2020 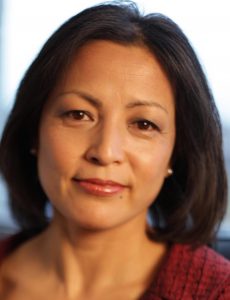 Jian Ping is the author of Mulberry Child, which tells the story of her coming of age and her family's struggle in China during the Cultural Revolution. The book was developed into an award-winning documentary film, also titled Mulberry Child. Jian Ping is associate producer of the film. She also directed Art Paul of Playboy: The Man Behind the Bunny, and executive produced an eight-part musical series Passage to the Middle Kingdom, introducing Chinese traditional music and musical instruments to the United States. She worked as consultant for WFMT Radio Network in Chicago, brokering classical music exchange programs and productions between WFMT and various parties in China. Jian Ping grew up in China, and obtained her bachelor of arts in English literature at Jilin University and her master of arts in film and international affairs at Ohio University. She worked at different companies in Beijing, New York City and Chicago before pursuing a career in creative writing and filmmaking.

By Jian Ping
Many people make life-changing moves across borders. Some as desperate refugees, some in quest of a better life. And their experiences are drastically different.

As I read Exit West by Mohsin Hamid on the impact of migration on people, I can’t help but recall my own experience of coming to the United States, and how my journey has changed my life and my daughter’s.

I’m lucky in that I chose to move. When I came from China to pursue my higher education, I took my “exit west.” At the time, I didn’t know I wouldn’t return.

I grew up in China during the Cultural Revolution (1966-1976), when the country was in political turmoil, and my family, like many others, suffered from political persecution. When I began working in Beijing after college, I found the working environment suffocating, but I was not allowed to change jobs. So I applied for graduate schools in the United States and was lucky to receive a scholarship. I worked on campus for additional support, as I had arrived with only $135—all the money I had. Despite the difficulties I encountered as a foreign student and an immigrant, I was able to find my footing in this country and sent for my daughter when I could support her.

My daughter, Lisa, who arrived in the United States at 4, had such a different journey than mine. She had to learn English from scratch and endure discrimination early on, but she was largely sheltered and provided for. When we moved from our cockroach-infested apartment in Queens, New York, to a suburb in Chicago, our economic situation was substantially improved.

And while I established myself as a professional in business management, Lisa became a free-spirited, all-American girl. I found it hard to communicate with her when she was a teenager, so I wrote Mulberry Child: A Memoir of China, hoping if I showed her where I had come from, she would understand me and my expectations. I wanted her to fully appreciate what she had and study hard for a better future, which I saw as the Chinese way—and not to live in the moment for instant gratification, which I saw as the downside of the American way.

Inevitably, our values collided. The generational and cultural gaps between us created a divide that kept us distanced. It was not until Mulberry Child was developed into a feature-length documentary movie that we began to face our differences.

We were both subjects of the movie, each revealing our own life and thoughts, and sometimes, “butting heads,” as Lisa would say. As we both attended many screenings of Mulberry Child at film festivals, addressing questions raised to us by members of the audience, we began to hear each other without direct confrontation.

We realized how my past had in many ways haunted her life. This open communication helped us gain a new level of understanding. We became close again, accepting each other and bridging our differences.

As I’ve continued to evolve and eventually embark on a career in creative work such as writing and filmmaking, Lisa has become a global citizen by crossing multiple borders. Not only has she become a world traveler, having visited 75 countries, she has worked in four. After starting her career by working for five years in Chicago, she moved to Frankfurt, Germany. Then she obtained her MBA from Booth Business School at the University of Chicago’s London campus and worked as a consultant in Brussels, Belgium, for a couple of years. Now, she is working in Amsterdam, a metropolitan city she loves, as a strategic manager for a large international company. Unlike the teenager who fought with me about learning Chinese, she now speaks fluent Chinese and French, and is learning Dutch and German. I can’t be more proud of her.

The journey beyond borders that Lisa and I took is different, but in the end, our lives are much enriched and broadened by the moves we have made. As a result, we are able to contribute more to society as well.

With globalization, our world is becoming smaller and more connected. Instead of building walls to mark borders and keep people apart, we should embrace diversity and work together to improve all lives and to build a better world.