What if all of Chicago read the same book? Explore the theme "Beyond Borders" with us: Read Exit West, attend online events and more.
OBOC Home OBOC Home
Oct 2020 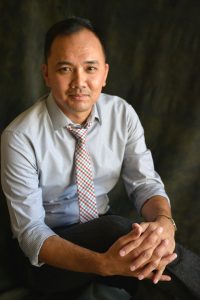 Vu Tran was born in Vietnam and raised in Oklahoma. His first novel, Dragonfish, was a New York Times Notable Book and a San Francisco Chronicle Best Book of the Year. He is the recipient of a Whiting Award and an NEA Fellowship, and his short fiction has appeared in the O. Henry Prize Stories, the Best American Mystery Stories and other publications. He received his master of fine arts from the Iowa Writers’ Workshop and his doctorate from the Black Mountain Institute in Las Vegas. He is a criticism columnist for the Virginia Quarterly Review and teaches creative writing at the University of Chicago, where he also directs the undergraduate program.

I grew up in a suburb of Tulsa, my younger years in a lower-income neighborhood of chain-link fences. We could see into most of our neighbors’ backyards, and they into ours. My parents, Vietnamese refugees, turned half our yard into a wild garden of vegetables that were no doubt alien to our white neighbors, our vines often snaking onto their mowed lawns. At one point, we even had a small coop of chickens. You’d have to drive an hour out of Tulsa to find a farm with chickens. That was my first home in America.

Backyards are more intimate spaces than front yards are, less manicured and more reflective of what goes on inside the home. God knows how some of these neighbors saw us and our very Vietnamese way of living. What we saw of them were their messes, their vicious and beloved pets, their treehouses, barbeques and endless toys, and of course their outdoor family dramas. Some of this was familiar to us and some of it alien, and some of it we ended up adopting ourselves.

We got along with those neighbors, but I can’t say we got to know anyone during the decade we lived there. Outside of my best friend next door, everyone else was a mystery to us, as I’m sure we remained to them. The most mysterious neighbors were the few who lived behind tall wooden fences. I figured they had more money and therefore lived richer lives, and because I couldn’t see any of it, I believed that privacy was something only the wealthy possessed to protect their more ordered and stable lives. I didn’t know yet that privacy is also a tool to distance and conceal, and that the fundamental motivation behind it—a very human one—is fear.

It’s useful for me these days—when considering the borders between countries, cultures and communities—to think of the ones we all erect as individuals. There are legal, financial and aesthetic reasons for building the borders around our homes and neighborhoods the way we do, and while those reasons are generally reasonable and even necessary, they’re merely the initial ones. What’s more interesting to me is how those borders make us feel over time and inevitably take on other purposes.

My mother is a strong but distrustful woman who escaped Vietnam by boat with her two young children, five years after my father, in the aftermath of the war, gave up everything to flee to America on his own and spent those five years preparing a life for us. They are decent, smart and friendly in their own way, but they have always been deeply fearful people, devout Catholics suspicious of the laxities and indulgences in American life. When they were away at work, my two siblings and I were allowed to play in the backyard but were forbidden to step foot out front, not even during summer vacations. The one house I could visit was my best friend’s next door, but I had to sneak to another friend’s house down the block. When I was 7 and got my first bike, I secretly rode around the block, a circle of more than 20 homes. Reaching the opposite side was like arriving in a foreign country.

Even though this lifestyle kept us apart from our neighbors, our small home was often full of family and Vietnamese friends, the site of festive weekend meals that my mother cooked and everyone loved. Our Halloweens were thrilling, the one day of the year that they permitted us to roam the neighborhood. And Christmas was even better, our decorations as American as anyone’s, our Christmas lights outside the most lavish on the block.

But then my parents opened a successful restaurant, and in high school we moved to an enormous house in a neighborhood surrounded by a golf course. My mother filled the house with expensive furniture, my father installed a security system, and our doors and windows were reinforced with wrought iron, along with our fence. The houses in that neighborhood were much farther apart and everyone had private fences, so we knew our neighbors even less there—though we were spending 80% of our waking hours at the restaurant anyway. From then on, fewer and fewer people came over, and we rarely visited anyone. There were various reasons for this, but one was that my mother had become wary of people prying into her perfectly ordered home. At one point, we stopped putting up a tree during Christmas. By then, we all argued regularly. My older sister moved out against my parents’ wishes, and I would have my own equally dramatic escape a few years later. I don’t think the family ever recovered, though from the outside you would have thought we were living the American dream.

I’ve spent the last two decades thinking about what, beyond the many interpersonal conflicts, contributed to us falling apart. The trappings of money, the stress of the family business, the specter of our refugee past, the difficulties of living in a predominantly white community—they all played a part. But one crucial reason was that we failed to see opportunity in situations where we were left open to people and they to us. Since that openness was not a choice, it felt like a vulnerability, so my parents did what vulnerable people often do: they sought distance, separation and privacy, mistaking them for privileges. That closed lifestyle doesn’t necessarily ruin a family, but it does severely limit who and what can help you when you’re ailing.

I’ve wondered how differently things would have turned out if we had lived somewhere like Little Saigon in Southern California, where everyone resembled us and there would have been at least some shared history. But wouldn’t my parents have been closed off in other ways? And would things in Tulsa have really been better if they had talked more to our neighbors over the fence, or invited them into our home, or visited them in theirs? I don’t know if it’s ever that simple. All I know is that for a decade now I’ve lived happily in a big city that my parents would have avoided for its perceived dangers. While I am always careful, I made a decision long ago to not make any decisions based on fear. The city has enriched my life immeasurably because of it. I’m convinced of that.