What if all of Chicago read the same book? Explore the theme "Beyond Borders" with us: Read Exit West, attend online events and more.
OBOC Home OBOC Home
Nov 2020 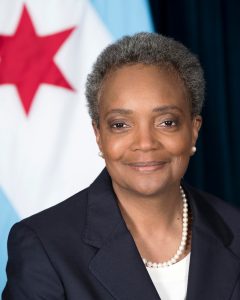 Lori E. Lightfoot is the 56th mayor of Chicago. A native of Massillon, Ohio, Mayor Lightfoot has been a resident of Chicago since 1986 and lives on the Near Northwest Side with her wife, Amy Eshleman, and their daughter.

Since its founding nearly two centuries ago, Chicago has been defined in large part by its brilliant, diverse communities. Whether it be the immigrants who made long, intercontinental journeys in the 19th century, the migrants from our country’s South making their way up North during the 20th century or the immigrants still arriving in our city today, this rich history of people moving to Chicago—away from the borders they’ve known their entire lives—has helped our city become a cultural melting pot and a magnet for those seeking opportunity, safety, freedom and above all, a new place to call home.

In thinking about these journeys, I’m reminded of my parents—Ann and Elijah Lightfoot. For them, Ohio became their refuge—what Chicago was and continues to be for so many immigrant and migrant communities. They were both born in the deeply segregated South during the late 1920s, where Jim Crow laws burned bridges between people simply because of the color of their skin and left African Americans like my parents with virtually no opportunities for upward mobility. So, separately, their families fled the South during the Great Migration and settled in Ohio to make a life for themselves.

By the time I was born in 1962, however, the same barriers my parents fled from were still present. I was born in Massillon, Ohio, which was and still remains a segregated city. Most African Americans lived on the east side of town. My family was one of the very few African American families living on the mostly white west side. As I watched my own parents struggle to take care of myself and my three other siblings, the racial and economic dynamics of this physical divide were only amplified. They worked multiple jobs to keep the lights on and food on the table. And their constant worry was that we wouldn’t be able to afford the basics—even after we were fortunate enough to have a mortgage and move into a house. On top of all this, I also witnessed my father—who had become deaf due to a bout of meningitis—struggle to overcome communicative barriers. He was a brilliant man who had dreams of becoming a lawyer, but unfortunately, the combination of his hearing loss, his race and his high school-level education meant that opportunities for him simply didn’t exist.

Despite my early life and experiences being littered with social, economic and physical borders of all kinds, my mother was always insistent that I never let them define me or my potential. For her, race, gender and economic status were not excuses for anything short of excellence, and after seeing my parents struggle for so much of my life, I was determined not to let her down. So instead of being boxed within borders, I made it my life’s mission to transcend them. At my predominately white high school in Massillon. During undergrad at the University of Michigan. As a law student at the University of Chicago. And now, in Chicago, as the city’s first African American woman and openly LGBTQ+ mayor.

We can’t choose which borders we are born within. But like my mother taught me, we can change how they define us. And as mayor, I’ve made it my responsibility that no matter what country, community or neighborhood a resident calls home, they still have equal access to the tools they need to improve their quality of life. No border, whether it be physical, social or economic, should prevent people from achieving their God-given potential. Nor should borders be used to create divisive tension between each other.

Now, at a time when social distancing has created yet another set of borders between us, it’s time we see borders for what they are: conversation starters. Opportunities to learn. And chances to develop a genuine relationship with someone with experiences different from our own. This is how we develop empathy toward our neighbors—both across our 77 neighborhoods and beyond the borders of our Chicago.