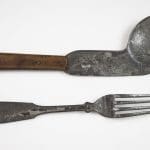 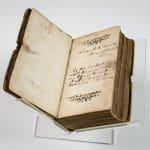 In my life, I’ve held and touched many objects and things. Some I remember, many I’ve forgotten. I’m thinking specifically of my grandfather’s hands. Those rough hands. Sharecropper hands. Old hands. Spanking hands. Hands that as he aged, I wanted to hold less and less.

He died in 1999 and my memory of him is fading. Other than his obituary that sits in his children’s photo albums, there’s nothing left of his to physically hold. Was there anything of his that I wish had survived his death? I don’t know, but if you work or spend enough time in an archive, like I have, you start to wonder about the ways you are or are not preserving your family’s stories.

In CPL’s Special Collections, there are Civil War rations and a soldier’s spoon and fork set that survived the war. The U.S. government did not issue any standard eating utensils during the Civil War, yet the utensils belonged to someone - Marion F. Isbell of the 30th Indiana Volunteer Infantry - and have a story. Special Collections keeps many objects and documents for anyone to view and learn from, including Civil War era documents, letters and diaries; photographs and images; sheet music and newspapers.

In my family, we remember a stew my grandfather used to make, but everyone has a different version of the recipe. We’ve concluded that perhaps the ingredients of the stew changed depending on what vegetables or crops were in season when prepared. I never gave it too much thought, and it wasn't until after I read Tiya Miles’s National Book Award-winning publication, All That She Carried: The Journey of Ashley's Sack, a Black Family Keepsake, that I realized all the information that a recipe or object can provide. Miles was able to craft this historically rich narrative by filling in the gaps and silences in archives by relying on objects, textile and agriculture.

After reading Miles’s book, I thought about the work we do in archives, but also of the field work that leads itself to what we preserve and collect. I thought too of how an object can remind you of something long gone, and how something as simple as an inscription from a loved one in a book or something embroidered on fabric can be sentimental in the moment, but invaluable to the future.

Schedule an appointment with CPL's Special Collections to explore the ways the past is preserved in the objects we use each day.