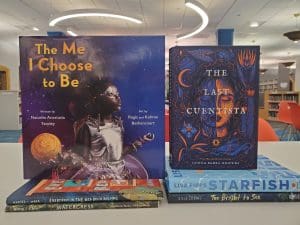 In 2022, librarians at Chicago Public Library gathered virtually to do one of their favorite things: talk about books and predict which ones will win the big awards this year. The American Library Association announces the Youth Media Awards in late January. Their awards include the classic Newbery, which celebrates its 100th anniversary this year, and Caldecott. When the real awards are announced, don't miss out on the other awards, especially the Schneider Family Book Awards, Pura Belpré Awards and Coretta Scott King Awards.

The Newbery is given to an author for their writing and is typically awarded to a chapter book.

And the mock award goes to The Last Cuentista! Travel through time and space with Petra on a spaceship leaving Earth before it becomes uninhabitable. Her journey is supposed to take her to Sagan, with a group of like-minded colonists looking to save humanity and Earth's history. Instead, when she wakes from stasis, she finds herself in a brainwashed collective. Is she the only one who can remember Earth? How will she survive this new nightmare?

Honors went to two deserving titles. Starfish is the story of Ellie, a fat 12-year-old who is fine with her weight, but not with how people treat her because of it.

Too Bright to See: When Bug's uncle dies, everything changes, and Bug feels like the old rural house they live in is more haunted than it was before. Is it related or is it a new ghost who shows itself only to Bug?

The Caldecott is an award given to an artist for their illustrations and is typically awarded to a picture book.

CPL's mock award goes to The Me I Choose to Be, a book filled will playful and empowering portraits of Black youth dressed as "the me I choose to be" styled and photographed by Regis and Kahran Bethencourt with text by Chicago author Natasha Anastasia Tarpley.

Honors went to two deserving titles. Everybody in the Red Brick Building: When a baby wakes in this urban apartment building, other residents start to wake and make noise. Illustrator Oge Mora's bold collage show a diverse set of residents waking and falling back to sleep in this cumulative story.

Watercress: A young girl is dismayed when her parents stop their car at the side of the road to gather watercress but comes to appreciate it as she learns more about her family’s history. Illustrator Jason Chin's watercolors illuminate the story of this dish for this Chinese American family.

What books do you think deserve awards this year?