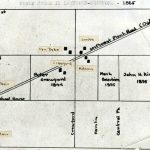 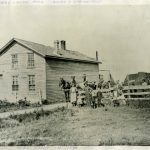 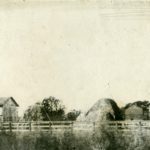 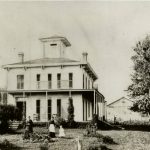 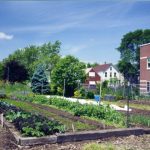 This year's One Book, One Chicago, Barbara Kingsolver's Animal, Vegetable, Miracle, encourages readers to think about their relationships with the food they eat. Kingsolver and her family complete a yearlong challenge to grow, produce or buy locally all of their food. The book also criticizes the international food industry for compromising health in favor of efficient production, and for its environmental impact. While you probably know that Chicago has been at the center of industrial agriculture and mass produced food, you may not know about the distant and recent past of Chicago's local farming.

Chicago's earliest residents, of course, had to grow their own food. You can read descriptions of a working farm in 1890s rural Evanston in the Elizabeth Chandler Papers. Our neighborhood collections frequently highlight the farms located in their communities. The Austin Community Collection, the Lawndale-Crawford Community Collection and the Chicago City-Wide Collection especially shed light on Chicago's rural past.

A newspaper clipping from the Chicago City-Wide Collection tells the story of a local "truck gardener" who made a good living by driving produce from nearby farms to markets such as the one that used to be on Randolph Street. Truck gardeners thrived in the first half of the 20th century and can still be seen at today's farmers markets all over the city.

More recently, due to concerns like Kingsolver's, there has been renewed interest in locally grown food. One direction this has taken is the urban farming movement. The City of Chicago, in the last 25 years, has embraced ideas from this movement and has worked to implement policies and regulations that encourage local and sustainable food production and distribution. These efforts are documented in Series 14: Food of the Open Space Section Records.

As 2017 begins, maybe we should all resolve to follow in the footsteps of generations of Chicagoans and eat locally.