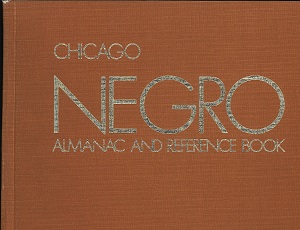 Did you know that Duke Slater became a Chicago attorney and judge after being one of the few African American professional football players of the 1920s?

That in 1924, Fannie B. Williams became first female member of the Chicago Public Library's Board of Directors?

That Jesse Binga's wife inherited a quarter million dollars in the 1890's? Jesse parlayed it into ownership of over 300 properties and a bank named after himself, only to lose it all during the Great Depression.

That John Jones, although born free, while a teenager was sold as a slave? He legally escaped this fate and moved to Chicago with $2.50 in his pocket. At the time of his death he was worth $50,000, a considerable fortune at the time, and had been the first African American to hold elected office in Cook County and probably Illinois.

That Chicago's first African American police officer was appointed in 1872?

This and more in the Chicago Negro Almanac and Reference Book. Despite the outdated title and the disorganization of this 256 page reference book it truly belongs on my list of Chicago history classics. It is packed with information not easily available elsewhere. Reading it leaves you with a sense of wonder and the feeling you have learned many new things.