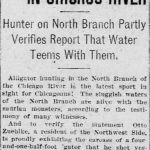 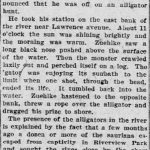 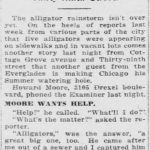 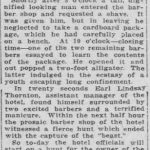 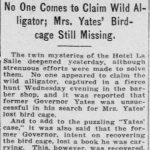 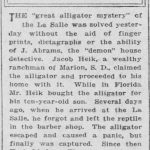 With news of Humboldt Park’s newest notorious (and likely temporary) lagoon resident -- alligator Chance the Snapper -- I was curious if other gators had made headlines in Chicago. A quick search of the early 20th century newspaper Chicago Examiner uncovered more than 300 alligator articles.

Chicago may be in the midst of #gatorwatch2019, but there was plenty of gator watching in 1908, when at least a dozen alligators escaped Riverview Park and found their way into the Chicago River’s north branch. Alligator hunting suddenly became a popular sport. It was front page news when Otto Zuehike caught a nearly five footer near Lawrence Avenue as recounted the October 16 article “Kills Alligator in Chicago River.”

The July 21, 1915 issue of the Examiner included “Here’s Another Live Alligator.” Reporters stated that the “alligator rainstorm” continued with sightings of reptiles on sidewalks, vacant lots and specifically a sewer at Cottage Grove Avenue and 39th Street. Howard Moore claimed he wrestled the sewer gator and wondered what he should do with it. Reporters suggested he take it home or bring it to the Examiner offices. Neither Moore, nor the alligator, appeared.

On January 20, 1916, a “dignified looking man” visited the Hotel La Salle barber shop for a shave. He left behind a cardboard box containing a two foot alligator. Thus began one of the “Deep, Dark Mysteries at the La Salle.” A day later on January 21, the paper offered an update in “Twin Mysteries at Hotel La Salle Growing Deeper.” The mysterious man could not be found, and the “alligator meantime was kept in the check room.” Evidently he was on a hunger strike. That was probably a good thing for hotel staff. The whole affair concluded on January 24, 1916, four days after it began. The “Hotel Notes” section of the paper led with how the “great alligator mystery” was solved when Jacob Heik came to claim the reptile. The South Dakota rancher had been to Florida was bringing the animal home as a souvenir for his son.

I don't recommend bringing home an alligator of any size, but if you want more historical gator stories, you can read these articles and others in CPL's Digital Collections.