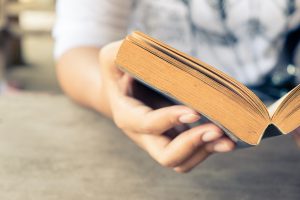 When Robert Fair de Graff founded Pocket Books in 1939, publishers doubted Americans would be interested in buying paperback books. But, based on the success of Penguin Books in Britain, De Graf believed that making books smaller, less expensive and more available would increase readership in the United States.

The first 10 titles reprinted by Pocket Books sold for 25 cents each. In part because of this lower cost, the paperback format enabled new genres to achieve popularity, including westerns, detective stories, romance and books based on films.

Paperbacks have maintained their reputation as portable, affordable and readily available. In honor of Paperback Book Day on July 30, I kept my eye out for paperback book readers around the city. Here's what I caught our fellow Chicagoans reading this month.

The retro cover of your copy of Edith Wharton's The Age of Innocence caught my attention during a rush-hour commute. Who did you think was best for Newland Archer—May Welland or Ellen Olenska?

It's no surprise that you looked totally focused while reading Jack Kerouac's The Dharma Bums. This semi-autobiographical novel is based on the author's time as a young writer in 1950s California. If you like writing that takes you out of your head, try this book by one of the beat generation's strongest literary voices. (And check out Jeremy's blog post Poet Lawrence Ferlinghetti, Beat Memoirs and Culture for more recommendations.)

On the Brown Line I caught you reading 2014 Pulitzer Prize-winner The Goldfinch by Donna Tartt. After the death of his mother, 13-year-old Theo is captivated by a small painting of a yellow bird that reminds him of her. His affinity for the painting inspires his later career in antiques. This coming-of-age story deals with themes of identity and belonging as the main character continues to find his place in the arts community and society at large.

One Saturday on the Purple Line, I spotted you reading Treason's Harbour by Patrick O'Brian. This story of naval intrigue is set partly in Malta and centers on the trials of Captain Aubrey and ship surgeon Stephen Maturin. Full of swashbuckling and historical detail about the British Navy, this book pits our heroes against Napoleonic agents. If you enjoy this title, there's plenty of it—it's the ninth in a series of 20 installments.

Lastly, I saw you reading Grave Secret, the fourth and latest book in the Harper Connelly mystery series by Charlaine Harris. Harper and her stepbrother are trying to solve their older sister's disappearance. What separates this mystery from the pack is that after being struck by lightening, Harper develops a psychic ability that helps her locate dead bodies. Fans of paranormal mysteries and Harris' Sookie Stackhouse books should give this series a try.

How will you celebrate Paperback Book Day? Share your must-reads below.