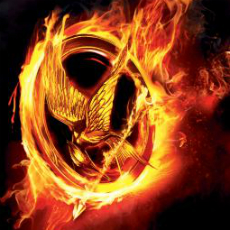 In honor of The Hunger Games' 10th anniversary in September, here are other books featuring young women, like Katniss, fed up with corrupt systems who discover what they are capable of when they decide to take a stand.

Murder, corruption and manipulation are not unique to the dystopian setting as Greer MacDonald finds out while on holiday from her posh boarding school in M.A. Bennett's debut novel, S.T.A.G.S. Invited for a weekend of huntin', shootin' and fishin' at the picturesque Longcross Hall, Greer finds that the prey isn't exactly what she expected.

Celestine North lives a Perfect life in this Cecelia Ahern duology, until a moment of compassion for the wrong type of person marks her as Flawed, and speaking the truth labels her a rebel.

In the violent world of An Ember in the Ashes by Sabaa Tahir, Laia never felt like she lived up to her parents' legacy. When soldiers burn down her home and arrest her brother on charges of being a rebel, in order to save her brother, Laia must figure out who she can trust and prove that she is every bit the Lioness her mom was.

When their plane crashes on a deserted island, Miss Teen Dream Pageant contestants struggle to survive while still preparing for the competition. Because sometimes you need some humor with your murder and corruption, Beauty Queens by Libba Bray is a must-read, and the book trailer is a must-watch.

Cosplaying is one thing, but when Violet and her friends wake up in the dystopian world of their favorite book, the violence and danger become all too real. In The Fandom by Anna Day, Violet must incite a revolution and die to get everyone home safely.

What's your favorite book featuring a woman fed up with the manipulations of a corrupt system?