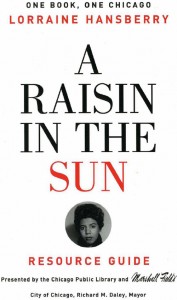 Born on the South Side of Chicago, Lorraine Hansberry took a line from a Langston Hughes poem: “What happens to a dream deferred? Does it dry up, like a raisin in the sun?…” to title her play about the experience of an American family pursuing their dream of a better life. Hansberry relates this universal theme in a work seeking to underscore “…the many gradations in … one … family, [of] the clash of the old and the new.”

A Raisin in the Sun was the first One Book, One Chicago title by a Chicago author and the first play selected. The announcement of this selection occurred at the Hall Branch, which was frequently used by Lorraine Hansberry and other significant African American authors living in Chicago.

In addition to book discussions throughout the city, there were also special events including a Goodman Theatre staged reading of the play and screenings of several film versions including the famous portrayal by Sidney Poitier of Walter Lee Younger and Ruby Dee as Ruth Younger. The Library was pleased to host a special free public conversation with Ruby Dee and Ossie Davis, as well as a panel discussion on public housing with Facing History and Ourselves.

Get a Library Card