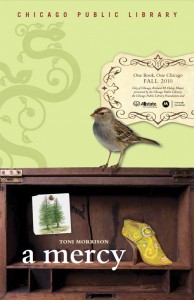 Toni Morrison is an icon of American letters and the first African American woman to win the Nobel Prize for Literature. With her novel A Mercy she returned to the subject of her most well-known novel, Beloved—slavery in America. However, this time Morrison’s focus is the era in which the foundations of racial slavery were just being laid, in the late 17th century. She brings us this period with a keen historical eye, fully realized characters from a vast array of backgrounds and her signature poetic prose.

One Book, One Chicago kicked off programming for A Mercy with a lecture by scholar Dwight McBride on Morrison’s importance as a leading American intellectual. Further programming included a staged reading with Steppenwolf Theatre; a series of genealogy workshops offered in libraries across the city, many focusing on searches involving the slave trade; film screenings of the documentary The Black List and the film adaptation of Morrison’s Beloved; and a discussion among scholars about race in colonial America. The Chicago Public Library was honored to host Toni Morrison, who gave a reading and talk on the legendary stage at Symphony Center to an audience of 2,000.