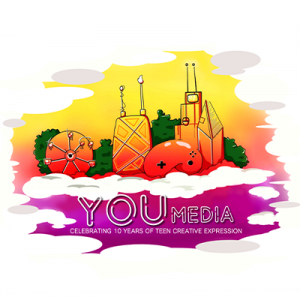 Teens, tweens and YOUmedia alumni, come for a day of performances, art projects and celebration of all things YOUmedia for our YOUmedia Block Party on Saturday, September 28!

We will be celebrating 10 years of all things YOUmedia, hanging out, messing around and geeking out in spaces that allow teens to unlock their creativity. The day will be full of performances by teens and alumni, special guests, food and activities, including a Smash Bros tournament. The stage will be full of performances by YOUmedia teens and alumni and will be headlined by librarian Roy Kinsey!

How It All Began

YOUmedia opened its doors July 11, 2009, to give Chicago teens, like you, exciting ways to explore, learn and just be themselves! Thousands of teens have discovered the library is not only a great place to find the best graphic novels and anime, but also has design software, recording studios and mentor librarians as well as amazing teens who have so much to share. Ten years later, it's time to celebrate all of the ways teens have contributed to Chicago through their creativity while hanging out at the library.

Check out YOUmedia to learn more about our early days and check out some of the research and thinking behind our success.