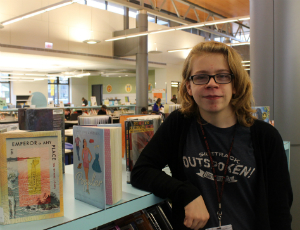 Each month we spotlight a teen, opens a new window at CPL.

Ella, a regular at Albany Park Branch YOUmedia, recently won a fellowship through the White House for her work on a video game she's creating called “Avidya.” She's been invited to present her game to White House officials, and will be awarded $1,000 for the continued development of her project. We sat down with her to ask some questions about her game.

Q: What was it like working on your game?

A: I didn’t take it quite as seriously when I started. It was the usual, “I’ve got an idea, let’s see how far I go with it before I give up.” I got a lot of help from the STEM mentor at my branch. She taught me how to use Tyranobuilder, the program I used to build the game. She was amazing moral support. I’m pretty sure if she wasn’t there telling me, “You’ve gotta do this; it’s going to be great,” I probably would have stopped. I didn’t give up and now I’m going to the White House.

Q: Tell us a little about your game.

A: My game plays kind of like a choose-your-own adventure book, with many different branching paths and outcomes. The game is about othering and making people bad guys, but through the act of applying for the fellowship, I really had a chance and a reason to go more in depth and explain the nuanced social statements.  (Laughs.)

Q: Why do you laugh when you say “social statements?” Your game definitely makes them.

A: You’re not supposed to say cheesy things like, “I’m making a social statement and starting a revolution; this isn’t just a game.” A deep game is supposed to reveal your darker self to you.

Q: What were some of the challenges you faced making the game?

A: People consume media because they like it more than real life. Either their life is boring and they want excitement, or they want things to be difficult for someone other than themselves. It takes a lot of creativity to build situations that are more enjoyable and exciting than actual life, but still believable.

To make things believable and exciting you need to set things up ahead of time and prepare people, so if you suddenly say, “You can bend spoons with your mind” you don’t have to retcon [revise] that later. If you set it up ahead of time, it’s more logical. It seems more important.

A: When designing it, I had to assume any combination of decisions could be made. Naturally I had put more work into certain paths because I thought people would be taking them more regularly. Playtesting turned out to be very interesting because people often chose paths I didn’t expect to be popular.

Once you choose a path I tried to keep the plot open, so people could go against who they originally thought they should side with. I was giving people an opportunity to take part in the themes of the game [othering, ignorance, misunderstanding]. People took part more than I expected, which felt good. I figured I had written it well if people were doing what I wanted them to do, which is question.

Q: How did it feel presenting to the public at Bit Bash vs. at the library in YOUmedia?

A: Bit Bash was different from YOUmedia. In YOUmedia I hunted people down and said, “You’re my friend, right? Play this game!” At Bit Bash people paid money to enter the building, found their way to my booth, and chose to spend time playing my game, so that hit it home to me that I’m really doing this. Now other people were talking about my game and showing their friends.

Q: How are you preparing for your trip to the White House, and what will you do with your award?

A: I’ve got to learn how to sell things to big, important people. The White House is just a house that’s white. It’s the same as Bit Bash and YOUmedia, just with people who are more important.

Once I get time after school, I plan to continue work on this. The part I have out to download is the first three chapters. I planned the plot out pretty far. I’m excited to make it real. I’m hoping with the grant money I’ll be able to pay an artist instead of mooching off friends to get the game fully illustrated.

A: Warning to the audience: I have pain planned for the game; you’re going to cry.