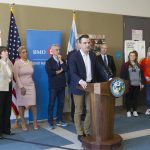 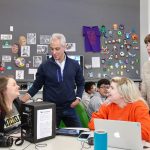 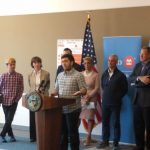 “YOUmedia is about empowering teens by exposing them to technology and encouraging them to innovate and create—investing in this program is investing in our teens and the future of our city,” Mayor Emanuel said. “I’m grateful for corporate partners like BMO Harris Bank that are stepping up for Chicago’s youth.”

YOUmedia, a nationally recognized program, builds on young people’s interest in technology and creating by connecting them with skilled mentors to engage them in active learning in a teens-only space. The free media labs and programs use the Connected Learning model to create links between students' academic studies, their personal passions, and opportunities to engage with peers who support and share their interests. YOUmedia also offers teens access to mentors and librarians who share their expertise in various areas of digital media production. In 2016, CPL witnessed a nearly 15 percent increase in general attendance at YOUmedia locations, numbering 45,772 sessions.

Programs and workshops focus on career exploration, science, fashion, making, using 3D printers and laser cutters, music production, photography, animation and graphic design. At its core, YOUmedia is about helping teens explore their interests and their identity by providing them access to a production-oriented environment.

“These significant gifts, combined with the increased support from the City, will enable us to expand our successful and vital programming for teens into more neighborhoods,” said Chicago Public Library Commissioner Brian Bannon. “By offering teens their own space in our community libraries, we’re connecting our young people to technology, resources and mentors that encourage success in school and in life.”

CPL piloted YOUmedia in 2009 with support from the John D. and Catherine T. MacArthur and Pearson foundations, to the Chicago Public Library Foundation; the program has now been emulated in 30 cities nationwide. Programming at four of Chicago’s 12 locations targets middle school students, while the other eight, including the flagship YOUmedia site in the Harold Washington Library Center, are designed for high school students.

“The Chicago Public Library should be commended for putting together such an innovative and engaging approach to independent learning,” said David Casper, President and CEO, BMO Harris Bank. “Our children are our future, and with our donation of $1 million, we are very pleased to play our part in helping to expand access to the YOUmedia teen program.”

Since 1873, Chicago Public Library (CPL) has encouraged lifelong learning by welcoming all people and offering equal access to information, entertainment and knowledge through innovative services and programs, as well as cutting-edge technology. Through its 80 locations, the Library provides free access to a rich collection of materials, both physical and digital, and presents the highest quality author discussions, exhibits and programs for children, teens and adults. CPL received the Social Innovator Award from Chicago Innovation Awards; won a National Medal for Library Services from the Institute for Museum and Library Services; was named the first-ever winner of the National Summer Learning Association’s Founder’s Award in recognition of its Summer Learning Challenge; and was ranked number one in the U.S., and third in the world, by an international study of major urban libraries conducted by the Heinrich Heine University Dusseldorf in Germany. For more information visit www.chipublib.org.

The Chicago Public Library Foundation (CPLF) was established in 1986 as an independent nonprofit organization dedicated to enriching the collections, programs, and technology initiatives of Chicago Public Library (CPL). With support from civic-minded corporations, foundations, and individuals, CPLF has over the past 30 years directed more than $80 million to the Library and helped to build and sustain numerous dynamic partnerships. This infusion of resources and energy has enabled the Library to launch crucial new programs and services that impact patrons city-wide, such as the Summer Learning Challenge, which served more than 102,000 children in 2016; Teacher in the Library, which last school year provided nearly 90,500 after-school homework help sessions; YOUmedia, the teen learning lab and mentorship program that serves 4,600 middle and high school students annually; and the CyberNavigators, who each month deliver nearly 13,000 computer skills development sessions to patrons with low digital skills.