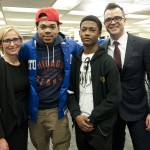 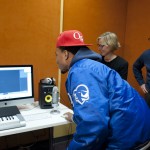 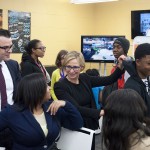 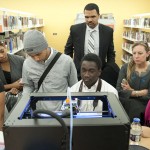 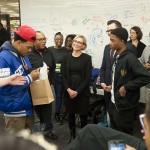 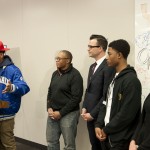 "Expanding digital media labs to libraries throughout the City will provide more teens with opportunities to foster their creativity and nurture their talents,” said First Lady Rule. “These labs also serve as safe places for teens to stay engaged, benefit from mentorship and form lifelong friendships.”

YOUmedia builds on a young person’s interest in technology in order to motivate them to create, innovate and become active learners. The free digital media labs and programs use the Connected Learning model to create links between students' academic studies, their personal passions, and opportunities to engage with peers who support and share their interests. The labs also offer librarians and other mentors who share their expertise in various areas of digital media production. In 2014, CPL witnessed a 50 percent increase in unique visitors to YOUmedia, with general attendance numbering 31,000 through programs and services ranging from creative use of 3D printers and laser cutters to mentoring and workshops in digital media production from music, photography, animation and graphic design.

“We’re excited to continue expanding the YOUmedia model into more neighborhoods as it’s been so successful in engaging teens in deep learning especially as they develop the skills needed for their adult lives,” said Commissioner Bannon.

As a teenager, Chancelor Bennett frequented the original YOUmedia space downtown in the Harold Washington Library, where he was able to perform in front of hundreds of teens before the rest of the world was introduced to him as Chance the Rapper.  The American hip hop recording artist from the Chatham neighborhood of Chicago got his start recording his first mixtape, 10 Day, in YOUmedia's studio at CPL’s Harold Washington Library Center.

"YOUmedia has been a tremendous resource for teenagers and young people across the whole city," said Alderman Howard Brookins, 21st Ward. "This will serve as a magnet to bring young adults to the Chicago Public Library system to an environment of learning and enrichment.  I sincerely appreciate First Lady Amy Rule and Chance the Rapper lending their names to this effort."

A 2013 study of YOUmedia conducted by the Chicago Consortium of Chicago School Research revealed that approximately 50 percent of program participants were African American teenage boys who travel on average 5 miles daily to access the program.  This new location at Woodson will offer a new service point for interested teens on the south side, including many of the teens that have traditionally had to travel all the way to the Loop.  According to that same study, YOUmedia cultivates a budding sense of community among teens who participate. This sense of community, along with peer relationships, serves as a potent force for driving teens to engage in digital media in new ways.

Specific classes include Games design, Podcast production, Video and Photography, Graphic Design, Writing Workshops, 3D printing, Robotics, Coding, Public art exploration, Fashion Design, and Music production. At its core, this work is about helping teens explore their interests, and their identity in the process, by giving them access to a production-oriented environment.

CPL piloted YOUmedia in 2009 with support from the John D. and Katherine T. MacArthur and Person Foundations, through the Chicago Public Library Foundation; the program has now spread to 30 cities nationwide. Chicago has 11 permanent locations as well as “pop up” programming throughout the city.

Since 1873, CPL has encouraged lifelong learning by welcoming all people and offering equal access to information, entertainment and knowledge through innovative services and programs, as well as cutting-edge technology. Through its 80 locations, the Library provides free access to a rich collection of materials, both physical and digital, and presents the highest quality author discussions, exhibits and programs for children, teens and adults. CPL recently received the Social Innovator Award from Chicago Innovation Awards; won a National Medal for Library Services from the Institute for Museum and Library Services and was ranked number one in the U.S. and third in the world by an international study of major urban libraries conducted by the Heinrich Heine University Dusseldorf in Germany. For more information, visit chipublib.org or call CPL at (312) 747-4050