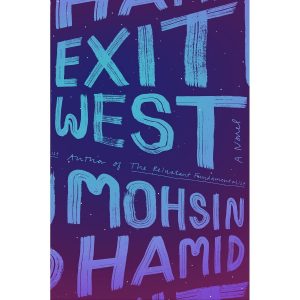 Exit West by Mohsin Hamid was the 31st selection for One Book, One Chicago. The season’s program explored the theme "Beyond Borders." From September through December 2020, we explored the theme from multiple perspectives, as recounted through personal experience, imagined in literature, presented in politics, or synthesized in music and art.

A New York Times bestseller, Exit West is an astonishingly visionary love story that imagines the forces that drive ordinary people from their homes into the uncertain embrace of new lands. In a country teetering on the brink of civil war, two young people meet—sensual, fiercely independent Nadia and gentle, restrained Saeed. They embark on a furtive love affair, and are soon cloistered in a premature intimacy by the unrest roiling their city. When it explodes, turning familiar streets into a patchwork of checkpoints and bomb blasts, they begin to hear whispers about doors—doors that can whisk people far away, if perilously and for a price. As the violence escalates, Nadia and Saeed decide that they no longer have a choice. Leaving their homeland and their old lives behind, they find a door and step through…

Exit West follows these remarkable characters as they emerge into an alien and uncertain future, struggling to hold on to each other, to their past, to the very sense of who they are. Profoundly intimate and powerfully inventive, it tells an unforgettable story of love, loyalty, and courage that is both completely of our time and for all time.

Exit West has won numerous awards and accolades, including being a finalist for the Booker Prize, one of New York Times Book Review's 10 Best Books of 2017, winner of the L.A. Times Book Prize for Fiction, and winner of the Aspen Words Literary Prize. The film rights to the book were purchased by Joe and Anthony Russo’s AGBO, and a film is planned, with Yann Demange directing, Riz Ahmed starring, and Michelle and Barack Obama's Higher Ground Productions and Netflix producing.

The 2020 One Book, One Chicago season, despite taking place during the global COVID-19 pandemic, featured a variety of virtual events, as well as online digital programming. Over 65 virtual programs as well as book discussions, recommended reading lists, digital content and web TV series were presented from September through December. Highlights included:

Watch archived programming from the 2020 season on our website.

In addition to events, the season featured several innovative digital programs including:

Check out some of our further reading recommendations: