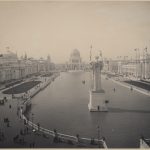 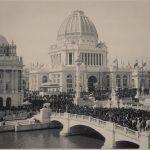 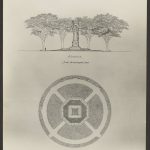 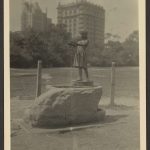 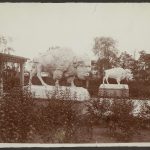 The Chicago 1893 World's Columbian Exposition, often called the 1893 Chicago World's Fair, lives on through pictures and writing, architecture and art. Some of Chicago's parks feature replicas of World's Fair statues, with surprising stories of how they got there.

Probably the most iconic statue from the 1893 Chicago World's Fair is the Statue of the Republic. Its replica scale model currently resides in Jackson Park. According to the Park District website, the original statue (nicknamed "Big Mary" by fairgoers) was made of plaster encased in gold leaf and designed by Daniel Chester French, who also designed the Lincoln Memorial in Washington D.C. Unfortunately, the original statue was destroyed in a fire shortly after the fair. The model was dedicated in 1918, on the 25th anniversary of the fair, on the site of the Fair's Administrative Building in Jackson Park. Though the replica stands at 24 feet to the original's 100 feet, both were designed by French.

The statue Fountain Girl was created by English artist George Wade, depicting a child with outstretched arms pouring water into a basin. The project was funded by the Woman’s Christian Temperance Union (WCTU) in order to promote drinking water instead of liquor. Fountain Girl was first installed at the fair near the WCTU booth. When the fair ended, the portable statue was installed in various areas of Lincoln Park until its theft in the late 1950's. Decades later, the Park District commissioned sculptor Andrzej Dajnowski to create a replica of Fountain Girl. The replica was installed in Lincoln Park in 2012.

Sculptor Edward Kemey designed the lions outside of the Art Institute of Chicago, so he was certainly no stranger to sculpting animals when he took on the task to create the World’s Fair Bison which sat outside of the Stock Exhibit at the fair. After the fair was over, the maquettes of the bison (smaller sculptures used as practice studies) were placed in Garfield Park on exhibition. In 1911, the bison were recast in bronze and moved to Humboldt Park a few years later, "switching places" with the statues Bulls with Maidens. The male bison, "Prairie King," stands parallel to the female bison, "Sound of the Whoop," who has her head to the ground, listening for danger. The pair guard the entrance of the Formal Garden in Humboldt Park.

At the time of publication, the Chicago Monuments Project was seeking feedback on past, present and future public monuments in Chicago, including replica monuments from the 1893 World's Columbian Exposition. Interested in learning more? Visit our Special Collections to view our research collections on the subject. For more park history, please visit the exhibit From Swamps to Parks, Building Chicago's Public Spaces at Harold Washington Library Center in the 9th floor Exhibit Hall. Special thanks to staff member Bianca Milligan for inspiring this post.