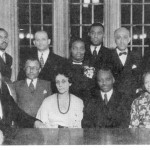 Committee in charge of the celebration of the 20th anniversary of the Association for the Study of Negro Life and History, 1935. Dr. Carter G. Woodson is pictured sitting to the far left, Vivian G. Harsh is pictured sitting in the center (white blouse).Chicago Public Library, George Cleveland Hall Branch Archives, photograph 004. 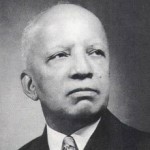 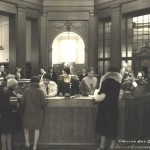 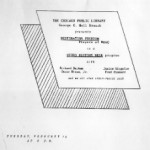 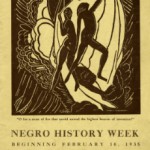 The story of Black History Month begins in Chicago during the late summer of 1915, when Dr. Carter G. Woodson traveled from Washington, D.C., for the State of Illinois-sponsored celebration of the 50th anniversary of emancipation. Woodson had a display on Black history at the Chicago Coliseum, which served as the exhibit hall.

Now known as the "Father of Black History," Woodson earned his bachelor's and master's degrees from the University of Chicago before receiving a doctorate from Harvard University in 1912. He was the second African American to earn a doctorate from Harvard, the first being W.E.B. Du Bois. After finishing his education, Woodson dedicated himself to the field of African American history.

Inspired by the three-week emancipation anniversary celebration, Woodson decided to form an organization to promote the scientific study of Black life and history before leaving Chicago. On September 9, 1915 Woodson met at the Wabash YMCA with A.L. Jackson, George Cleveland Hall and James E. Stamps to form the Association for the Study of Negro Life and History. (Learn more about the association in our blog post African American Life and History Association Turns 100.) Going forward the association would both create and popularize knowledge about the Black past. Woodson sent out a press release announcing Negro History Week in February 1926.

Woodson chose February for reasons of tradition. It is commonly said that Woodson selected February to encompass the birthdays of two great Americans who played a prominent role in shaping Black history, namely Abraham Lincoln and Frederick Douglass, whose birthdays are the 12th and the 14th, respectively.

From the beginning, Woodson was overwhelmed by the response to his call. Negro History Week appeared across the country in schools and before the public. Black history clubs sprang up, teachers demanded materials to instruct their students. One location that proved invaluable to students and teachers of Black history was Chicago Public Library's George Cleveland Hall Branch. Vivian G. Harsh, first African American branch head in Chicago Public Library, was an active member of the Association for the Study of Negro Life and History. She began her "Special Negro Collection" (materials relating to Black history) at Hall Branch. She organized numerous Negro History Week programs at the library.

In 1975, Vivian Harsh's "Special Negro Collection" (now the Vivian G. Harsh Research Collection of Afro-American History and Literature) moved to the Carter G. Woodson Regional Library. It's the largest collection of African American history and literature in the Midwest.

In 1976 as part of the U.S. Bicentennial, the informal expansion of Negro History Week to Black History Month was officially recognized by the U.S. government. President Gerald Ford spoke in regards to this, urging Americans to "seize the opportunity to honor the too-often neglected accomplishments of Black Americans in every area of endeavor throughout our history."