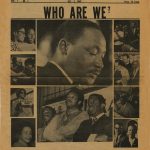 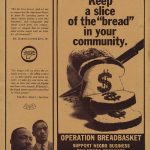 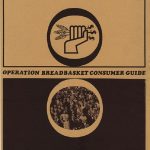 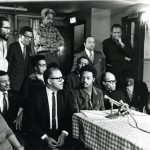 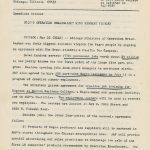 "Keep a slice of the 'bread' in your community." That was the slogan of Operation Breadbasket, the transformative economic program initiated in Chicago by Dr. Martin Luther King, Jr. and the Southern Christian Leadership Conference. "Bread" was the perfect metaphor. One needed to earn "bread," the slang term for money, in order to put "our daily bread" on the table.

On February 11, 1966, hundreds of local pastors of various denominations packed the pews of Fellowship Hall at Jubilee CME Church in Chicago. They came to hear Dr. King unveil his plan to address the city's high unemployment numbers for African Americans. The response was enthusiastic. Dr. King would later describe Operation Breadbasket as the most successful program of his Northern Campaign. The young theological student Jesse Jackson was named the project's coordinator.

How did the program work? Teams of ministers surveyed the hiring practices of local companies. Those with few or no African American workers were asked to hire a percentage of qualified candidates within the next few months. The goal was to create a workforce that reflected the racial composition of the city.

Operation Breadbasket favored negotiation with business leaders, but when employers refused or backed out of hiring agreements, hundreds of participating ministers headed for their pulpits. There they asked their congregations to consider the morality of shopping at stores or buying products from businesses that took sales money from the community, but did not hire its residents. This led to several "Don't Buy" (short for "Don't Buy Where You Can't Work") picketing campaigns outside of supermarkets.

These early successes inspired the expansion of campaigns to drug stores, soft drink companies, retail outlets and the construction industry as well as the creation of a Black Expo to showcase African American businesses and products. In his history of Operation Breadbasket, Rev. Martin L. Deppe calculated that Chicago's programs netted approximately 4,500 jobs and sharply increased the transactions of black-owned businesses over six years.

Another Chicagoan, Harold Washington, was responsible for introducing a bill in the Illinois legislature to commemorate Dr. King's birthday and keep his inspirational leadership alive.