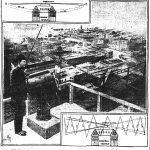 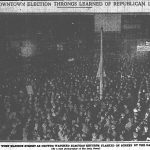 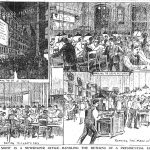 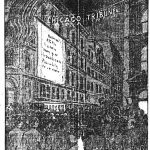 It’s the day of a presidential election. You know how it goes: you go home after work, turn on the TV, and by the time you go to bed you (usually) know if there’s a new president.

But what did people do before TV was invented?

Before television, it was pretty much the same, except, starting in 1920, they listened to the radio. That year, the country’s first commercial radio station announced the election results that were being phoned in to the Pittsburgh Post. The 100 people who listened to KDKA in Pittsburgh at 8pm that night found out that Warren G. Harding had won the election, before anyone could read about it in the paper.

But what about before radio? Did people really have to wait until the next day’s newspaper to find out who won?

Well, yes, and no. What thousands of people did was crowd around newspaper offices on election night. A large screen was strung across the front of the building, and crowds watched and waited for the stereopticon to flash the latest news bulletins.

But what about the people who couldn’t spend the evening outside the newspaper office?

Fear not, the newspapers were also thinking of them. In the late 1800s and early 1900s, newspapers used a combination of floodlights and other light displays to broadcast election results far and wide, visible maybe as much as 30 miles away.

In 1904, the Chicago Daily News used a searchlight on top of the Masonic Temple. The front page of the November 8 edition included diagrams to explain the coded light signals: “If [Theodore] Roosevelt is elected president the searchlight beam will be moved from left to right and from right to left. ... If Parker is elected the circular sweep of the beam of light will have a rocking or up-and-down motion.”

Back then, covering the election and gathering the results of the vote was a very work-intensive process. In 1896, the Chicago Tribune wrote a long description of all the preparation and work involved. You can see the four-part illustration in the picture gallery, above.

Covering presidential elections hasn't become any easier since then, just different. The history of the Washington Press Corps since the 1930s is covered by Donald. A. Ritchie in Reporting From Washington. Then, in 1960, journalist Theodore H. White wrote The Making of the President, 1960, which changed the way election campaigns have been covered ever since.