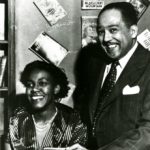 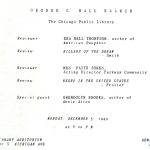 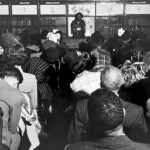 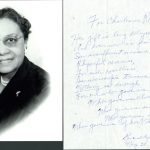 Photograph of Charlemae Hill Rollins (librarian and children’s author) and a poem dedicated to Rollins upon her retirement from Hall Branch. Rollins mentored Brooks as a fellow author. Brooks would go on to mentor and encourage many young writers. “For Charlemae Rollins, Her gift is long delayed, And even now is paid, In insufficient measure, Rhymeful reverence, For such excellence, Is microcopic treasure, Nothing is enough, For one who gave us love, Who gave us clarity, Who gave us sentence, Who gave us definition, Who gave us of her vision. Gwendolyn Brooks, May 25, 1963.”Source: George Cleveland Hall Branch Archives, photo 047 and box 3/folder 14 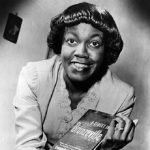 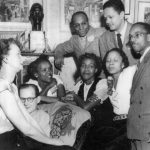 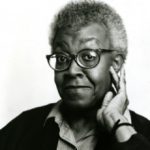 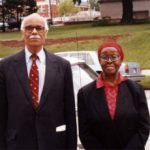 Although born in Topeka, Kansas, a century ago, on June 7, 1917, Gwendolyn Elizabeth Brooks will always be remembered as a true Chicagoan.

Brooks grew up in Chicago, where she began her writing career at 11, when she mailed a number of her poems to community newspapers. The Chicago Defender published a few of her earliest poems, an important achievement for such a young author.

In a 1994 interview, she said, "living in the city, I wrote differently than I would have if I had been raised in Topeka, KS...I am an organic Chicagoan. Living there has given me a multiplicity of characters to aspire for. I hope to live there the rest of my days. That's my headquarters."

In 1950, Gwendolyn Brooks was awarded the illustrious Pulitzer Prize for her book-length poem Annie Allen, a ballad of African American life in Chicago. She was the first African American to win a Pulitzer Prize for literature. Brooks also was the first black woman to be appointed poetry consultant to the Library of Congress, in 1985. During her career as a poet, author and teacher, she was honored with many awards.

Brooks was appointed poet laureate of Illinois in 1968, a position she held until her death in December 2000. She was perhaps more active than many laureates. Brooks worked diligently to make poetry more accessible through public readings. Many of her early public readings took place at Chicago Public Library's Hall Branch in the Bronzeville neighborhood, where she was a frequent visitor.

Learn more about Gwendolyn Brooks by checking out these new books celebrating Brooks' legacy or take a look at these recommendations:

Annie Allen is the book of poetry for which Brooks won the Pulitzer Prize in 1950. A sequel to A Street Called Bronzeville, Annie Allen continues to describe in detail the African American experience during the late 1940s through the experiences of a young black girl as she grows into adulthood. This vivid collection of poetry has stood the test of time.

The Essential Gwendolyn Brooks is indeed essential as it showcases the full range of Brooks' poetry with her ambitious scope and unexpected stylistic shifts. "If you wanted a poem," wrote Brooks, "you only had to look out of a window. There was material always, walking or running, fighting or screaming or singing." From the life of Chicago's South Side she made a forceful and passionate poetry.

In 1953, Brooks published her first and only novel, Maud Martha. The book details a black woman's life in short vignettes. It's a story about a woman who wonders about herself and how she fits into the world, a story to which anyone can relate.

Bronzeville Boys and Girls is a collection of 34 short poems for children. Brooks' words celebrate the joy and freedom of childhood with colorful illustrations by Faith Ringgold. This book is an excellent way to introduce Brooks' poetry to young readers.

The Marion Perkins Papers are also held in the Harsh Research Collection. Perkins, a sculptor, was one of Chicago's most talented artists. His papers include photographs and writings of Gwendolyn Brooks. The collection also documents her work in the Black Chicago Renaissance. The renaissance was a flowering of black creativity, activism and scholarship occurring in Chicago's South Side from the 1930s to 1950s. Brooks contributed to the literature of this period, which also saw unique African American contributions to art, music, journalism and sociology.