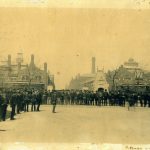 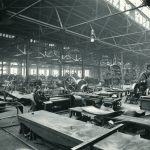 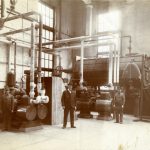 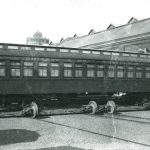 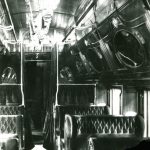 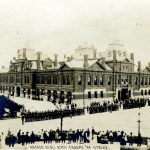 George M. Pullman first made his name in the 1850s by devising techniques for raising buildings to meet the new street level. (At that time, through engineering heroics, Chicago raised the level of its streets to facilitate the construction of an effective sewer system.) Pullman went on to become a successful railroad car manufacturer, specializing in luxury train cars with all sorts of revolutionary features of comfort. Pullman continued his pattern of industrial innovation by developing one of the world’s most famous planned communities: the town of Pullman.

In 1881, Pullman, about fourteen miles south of downtown Chicago, opened for business. It included a large factory to produce Pullman train cars, a hotel, a library, a bank, a church, a school, and the Arcade Building, which housed a number of small businesses designed to meet the needs of the town’s residents. The company also built housing for factory employees, and the houses were larger than most available to the working class at the time. George Pullman envisioned the town as a benevolent influence that would attract and provide for workers so they would not be prone to labor unrest. This dream was not realized.

While the town was populated quickly and hummed along successfully for several years, an economic downturn in the early 1890s proved difficult for residents. Wages were lowered for factory employees, but rent and other expenses, also controlled by the company, remained at the same level. George Pullman and the company stock continued to enjoy large profits, and Pullman and his management declined to enter arbitration with the workers. And so, 125 years ago, on May 11, 1894, the factory workers walked out. Management refused to return to negotiations, and soon the workers found powerful allies.

In late June, the strikers gained support from Eugene V. Debs's national American Railroad Union (ARU). Around the country, ARU workers boycotted any train that had Pullman cars, which included most trains, thus seriously impeding rail traffic, mail delivery and shipping services. In July, the federal government issued an injunction against the boycott and deployed soldiers in Chicago and nationally to get the trains running again. Unable to garner wider labor support, the strike and boycott were broken in mid-July.

Despite displeasure with the national boycott, public opinion seemed to side with the Pullman factory workers. In Report on the Chicago Strike of June-July, 1894, a federally appointed commission criticized the Pullman Company for refusing to negotiate with the workers, among other things. And in 1898, after George Pullman’s death, the Illinois Supreme Court ordered the Company to give up its residential properties, meaning factory employees would no longer have their employer as their landlord.

The 1894 Pullman Strike is an important highlight in the timeline of the American Labor Movement. To learn more, visit Special Collections and our Historic Pullman Collection. Or, you can visit Pullman itself, now a National Historic Monument.