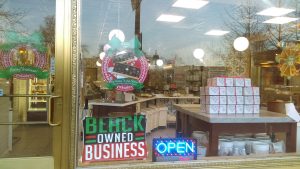 Black-owned businesses have garnered much attention lately and been the focus of calls to action across the country. Supporting minority businesses is viewed as a key component to solving economic injustice. While the urgency to support may be new, Black-driven enterprise is not.

African Americans have engaged in commerce for not just decades but centuries, thanks to their own ingenuity, initiative and determination. Prior to the Civil War, proprietors of color engaged in diverse areas of business including barbershops, shoemaking, farming, storekeeping, tailoring, blacksmithing, construction and more. Throughout the decades, African American trailblazers continued this tradition with noted individuals including Madame C.J. Walker, Berry Gordy, Jr., John H. Johnson and Oprah Winfrey.

These articles explore the history of and recent surge in support for Black-owned businesses. You can read these articles using CPL's Online Resources.

"The Black Wall Street Massacre Revisited" by David Johnson
Los Angeles Sentinel, February 20, 2020
The issue with the remarkable achievements of Black entrepreneurs like those noted above is that they have been few and far between. Not for lack of initiative, but due to suppression, discrimination and outright acts of violence. Johnson recalls the horrific devastation inflicted on the small, yet prosperous Black community in Tulsa, Okla. While tragic events such as this caused great setbacks, they failed to squelch the strength and spirit of Black enterprise.

Supporting Our Own While Paying it Forward

"Trailblazer Osei Rubie’s Equation for Success: Learn. Comprehend. Master." by Iman Essiet
New York Amsterdam News, April 23, 2020
Historically, Black entrepreneurs have been mainly supported by their own community. Case in point, Booker T. Washington, founder of the Tuskegee Institute, also founded the National Business League in 1900 to promote the advancement of Black initiatives. It continues to do so to this day. Many of today’s successful Black entrepreneurs also engage in mentorship and philanthropic activities that focus on expanding the presence of minority leaders and business owners in the marketplace. In this article, Black entrepreneur Rubie makes a dynamic statement: “Black wealth is absolutely tied to Black empowerment, I am unaware of any movement that did not have an economic background.”

But it will take more than the support of its own community to sustain the growth of Black businesses. The support of the larger U.S. society is a necessity for changing the economic narrative of the Black community. African Americans have long supported the products, services and goods of non-Black-owned establishments with little return on investment. In fact, Black culture has fueled the economies of other cultures, communities and even countries with little credit granted. However, this is changing, thanks to the current spotlight on long-standing discrimination and oppression.

"Black-Owned Businesses See Gains" by Mary Emily O'Hara
Adweek, July 27, 2020
O'Hara highlights the 2020 surge in consumer support for Black-owned businesses as a potential dawning of a new era for Black entrepreneurs. However, it also cautions that unless “policies and infrastructure are implemented that uplift and support the traditionally marginalized and disenfranchised communities, this support is simply another headline in the news.”

"Buying from Businesses Owned by Black People Is a Good Start. But Not Enough." by Lisa Braxton
Boston Globe, August 25, 2020
Braxton, the African American daughter of retired business owners, echoes the call for further action in the Adweek article. She writes, "Those who now choose to support Black businesses must make an emotional investment in them and the people who operate them."

"Facebook Is Expanding an Upskilling Program Aimed at Helping Black and Latinx Small Business Owners Who Have Been Hardest Hit by the Pandemic" by Marguerite Ward
Business Insider, October 28, 2020
One encouraging sign is that mega companies are going beyond the Band-Aid method of simply donating to the cause. Rather, some are now equipping emerging Black entrepreneurs with vital tools. This article explores a Facebook program to help Black and Latinx entrepreneurs grow their digital marketing skills.